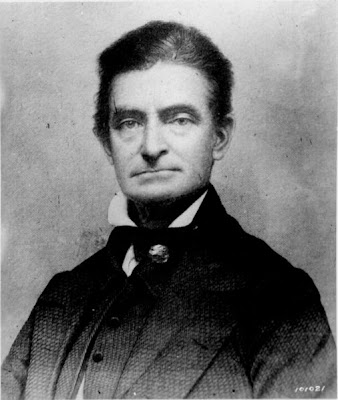 John Brown was an abolitionist. He is best known in American history as the man that led the failed attempt to steal munitions from Harper's Ferry in 1859. In Kansas he may be best known for the Pottawatomie Massacre.

Here is a link to an interactive time line hosted by PBS for their American Experience series. It shows from birth to burial John Brown's life.

After the raid, and Brown's execution, many northern abolitionists considered him a martyr to the abolition movement. The famous song "John Brown's Body" was used as a march during the Civil War by the Union troops.

John Brown's life is perfectly suited for the debate: Does the end justify the means?

In a way, your question is the same as this one:

Do the ends justify the means?

I am not in this class, but just found the site when researching John Brown. I'll give my thoughts anyway.

It's complicated. A person sees a 12 year old student being kidnapped with their own eyes not twenty feet away, and uses force to protect the student. Because of that person, the student is not harmed by the kidnapper, although the kidnapper is killed. In this scenario, I would summit that the end of protecting a kid justifies the means of using lethal force against the kidnapper.

What of a different situation, say, the current genocide in Darfur, Sudan? It is known that the Sudanese government murders innocent civilians by funding militias and by using air strikes. Would any person or persons who sought to protect the innocents of Darfur be justified, even if the means they employed involved lethal force? Again, I would summit that the end justifies the means.

I would summit that to be violent is not always to be aggressive. John Brown employed lethal force, yes, but he did so to protect the lives of others. In other words, he acted out of love and not hate.

A point to consider is that John Brown's actions would not have been necessary if the Southern slave owners, and Southern Society as a whole, did not at the time support the human rights violations manifested in the existence of slavery.

It can be argued that it was a way of life for the Southern States, but it does nothing to alleviate the crimes of the slave owners.

In the event of any true evil, any method to eliminate such evil is justified, provided that the method does not result in a greater evil.

Thus, I would argue that John Brown's actions were fully justified and he is therefore "Famous".

I don't think John Brown was a loony murderer!!!

I don't think John Brown was a "loony murderer" even though he killed many people... he is not a loony murderer but thats kind of hard to believe with him killing many people. He was an Abolitionist as a kid and his belief to stop slavery grew until he was near mid-aged when he would do anything in the world to stop slavery.
It wasn't really that he was crazy or just wanted to kill people he was killing people for belief -belief to stop slavery which happened. I would say hes famous for various reasons. He started a spark in the Civil War -sped it up.
He fought for his belief. And he wouldn't stop until slavery was abolished.

I Think He is Famous.

we know that John Brown was killing people for the right reason,but we think it was injustice when he killed a free black man in Harpers,Ferry.

We understand that he was willing to do anything to stop slavery,but John Brown wasn't just a murderer, you could say he was a revolutionist,because of him the Civil War started and we thank him for that.In our eyes John Brown is a hero.

I think John Brown was a loony muderer.

Well I don't think John Brown was a "loony murderer" at all...He was standing up for the things that he believed was rite. Sure he killed many people,but,if you think about it he really killed them to show people that he was willing to do ANYTHING to stop slavery...and when I say ANYTHING I mean ANYTHING,(trust me on this)
Well...to get to the piont I think he is FAMOUS!!!