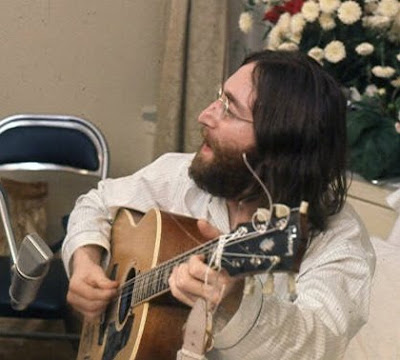 My students were disappointed that I remember Pearl Harbor day on Tuesday but didn't do the same for John Lennon yesterday. Not wanting to disappoint them, I have created this post.

Here is an article on the MTV site written about the last interview he did before his death.

John Lennon's Jukebox: A documentary about the music he listened to.
Woman: Music video of the song.
John Lennon news coverage of his murder.

The Ed Sullivan Show: Second US appearance of The Beatles
There are some related videos on the right of this page.

In the MTV article Lennon states: "We're born-again rockers, and we're starting over. ... There's plenty of time, right? Plenty of time." Soon after he was shot and killed. What can you learn from this?
Posted by Wm Chamberlain at 8:51 AM

I think he meant that there is plenty of time to do whatever he wanted to do.

I learned that life is a precious thing and we shouldn't waste it by waiting to do things that we could do today.

John Lennon what can I say about this legend.. John was one of the Beatles and then went solo..
He did what he wanted and needed to do,he took time off of his song writing to take care of this son.

I learned that John Lennon made popular songs during the rock and roll time period. He was very popular back then and still is today. I think that he was murdered because of jealousy. John Lennon was a true rocker. I think John Lennon said those lines cause thats what he was feeling inside. Thank You!!! John Lennon a true ROCKER................

I learned that John Lennon wrote some of the most popular songs in rock and roll.
I think he was murdered because of jeaolsy.I think that he said those lines because he meant [what I think}is that you are born a rocker but you just have to let that side of you out.

I learned that John Lennon didn't have a very good life. And that we should not wait on things that might never come. Take a risk and go for it.

You can learn that life is wonderful and is a gift, so treat every day like its your last....

I learned you probably shouldnt say you have plenty of time because nobody know how much time you truly have left.

I think that what he meant was that you should get what you want do accomplished when you can.Also that since they are born again rockers, they are starting all over to make things better.And, theirs plenty of time to do it.You shouldn't worry about what can happen you should just think positive and live life without thinking that it could end soon.