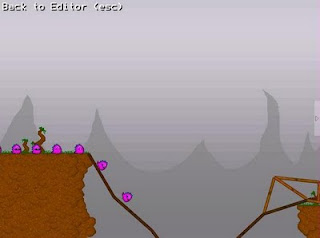 A couple students caught me playing X Construct on my phone during lunch today and wanted to play themselves. I told them I would find a PC equivalent so they could try it out on their own. Here is one I found called Bridge Building Game. The purpose of the game is to construct a bridge that will allow the lemming like pink dinosaurs to cross safely across a chasm.

Here are links to similar games:

http://www.whitehouse.gov/blog/2011/04/02/weekly-address-gas-prices-energy-security
How could what President Obama says in this address affect the drilling for oil in the Gulf of Mexico? How much oil was being pulled out of those wells and how does that compare to the amount of oil the President's plan says we will save? What other options does the President address instead of using fossil fuels? How many barrels of oil will we be importing in 10 years according to the President's plan?

Here is a link to the transcript of the address.

Posted by Wm Chamberlain at 9:36 AM 0 comments

Should British Petroleum Be Allowed to Resume Oil Drilling in the Gulf of Mexico?

British Petroleum has petitioned the United States government to resume drilling for oil in the Gulf of Mexico. Read at least one story from each subheading on the linked page. You should see Blogs, United States, and Mississippi. You will link back to them on the post.

Link to the stories.